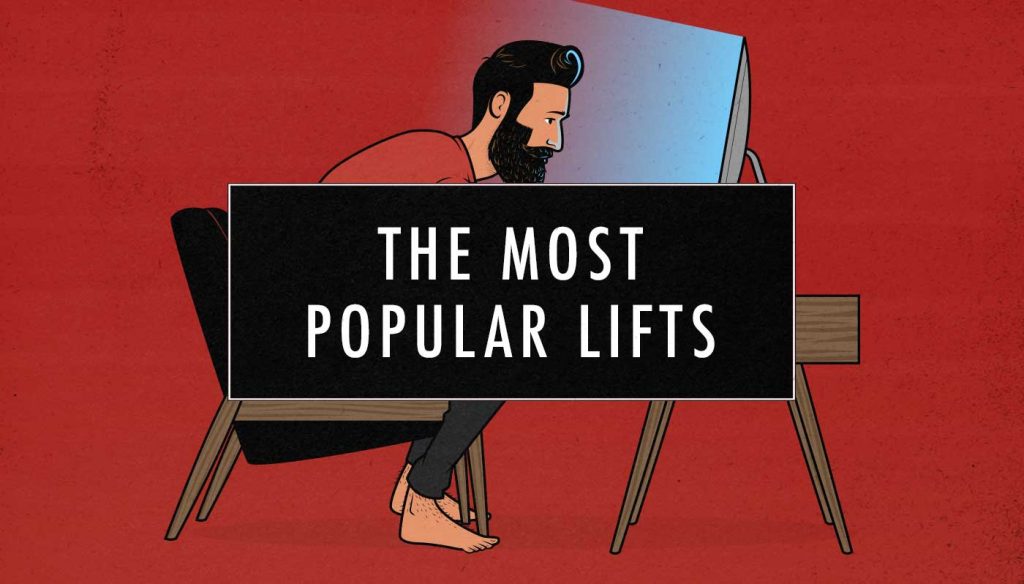 Or what about if we compare squats against deadlifts? Both are big strength training lifts that help people gain a profound amount of muscle mass and general strength. And where does the overhead press fit into all of this? It’s one of the best lifts for improving our appearance and upper-body strength.

What about the barbell curl? Hip thrusts? To get to the bottom of this mystery, I looked up Google search trends over the past ten years to compare and contrast the popularity of the various lifts.

In this article, all I’m doing is going to Google Trends, looking up how search traffic has evolved over the past ten years for various lifts and then pasting the graphs here. Will this help us build muscle? Probably not, no, but I found this all rather fascinating nonetheless.

It makes me happy to see that the deadlift is on the rise! Over the past ten years, it’s been steadily gaining popularity as a search term. This surprised me a little bit because many fitness experts are starting to talk about how although, yes, the deadlift stimulates more overall muscle growth than any other lift (with the possible exception of the squat), it’s also disproportionately fatiguing. It has a high stimulus-to-fatigue ratio, you could say.

Most recreational lifters don’t need to worry about the stimulus-to-fatigue ratio of their lifts. Doing a few casual workouts per week isn’t enough to cause excess fatigue. But a lot of people who are interested in bodybuilding are trying to mitigate the fatigue generated by the deadlift by doing lifts like the Romanian deadlift instead.

The squat, on the other hand, seems to have plateaued. This surprised me, too. As strength training continues to grow more popular, I would have thought that the main strength training lift—the back squat—would have continued to grow in popularity along with it.

However, if we compare the squat (red) against the deadlift (blue), we see that the squat is still the more popular lift.

If we look at the front squat, we see a steady rise in popularity. Now, my assumption on seeing this was that although its popularity was rising, that it would still be relatively unpopular. That wasn’t the case.

What surprised me was that front squat (red) and back squat (blue) are searched with about the same frequency. Outside the context of powerlifting, I think the front squat is a better lift. It’s safer, better for building muscle, better for improving posture, and better for bulking up the upper back. But I didn’t think it was as popular. Looks like I was wrong.

The bench press looks like it was slightly dipping but then surged up to a slight peak this year. What I’m more interested in, though, is how popular the bench press is compared to the squat.

Regardless, you’d think that there’s similar interest in building the chest as there is in building the legs, people wouldn’t be more interested in squats than the bench press, but they are.

Okay, here’s a mystery: what happened in December 2011 to cause so many people to start googling about push-ups? And why did they stop?

Even in the very best of times, though, the push-up is dwarfed by the popularity of the bench press. And perhaps unjustly, too. The push-up is a great lift. Although to be completely honest, I bench press far more than I do push-ups. So I suppose I’m part of the problem.

Similar to the deadlift, it looks like the overhead press has been gaining popularity over these past ten years. If we compare it against the bench press, though, we see that it isn’t faring so well.

I think the overhead press is a relatively underrated lift, but I can see why the bench press is so much more popular. Not only is it an official powerlifting lift, but it’s also quite good at bulking up the chest, and it even trains the shoulders in a stretched position, which is great for bulking them up.

The chin-up is not faring so well at all. It started strong in 2010 but has been falling in popularity ever since. I wonder why. It’s a great lift for the biceps and upper back—better than the barbell row. And it’s great for gaining overall muscle size, strength, and aesthetics. Why is it becoming less popular?

I thought perhaps the chin-up was losing popularity because people were searching for pull-ups instead, but no, pull-ups are going down in popularity, too.

Pull-ups are indeed more popular than chin-ups, though, which is funny. The main difference between the two lifts is that the chin-up is a heavier lift that engages the biceps whereas the pull-up is a smaller lift that mainly engages the back. Why don’t people want bigger biceps?

The barbell curl has been steadily gaining in popularity. What’s weird is that people are intentionally trying to build bigger biceps, but they’re also choosing compound lifts that intentionally disengage the biceps, such as doing barbell rows and pull-ups instead of chin-ups.

The incline curl is better for bulking up the long head of our biceps, though, and if we’re already hitting our biceps with compound lifts (such as chin-ups), then it’s the long head that stands a risk of lagging behind. The preacher curl, however, is quite a bit more popular than the incline curl.

The worst offence of all, though, is that the sissy curl is barely being searched at all. If we compare it against the barbell curl, it doesn’t even register. It’s too bad. The sissy curl is probably better at stimulating biceps growth, especially in the long head.

The Dumbbell Fly vs Cable Fly

The dumbbell fly and cable fly are both similarly popular and have both been steadily rising in popularity. What’s interesting, though, is that if we add in the cable crossover, we see that it was incredibly popular ten years ago, but not any longer.

My personal favourite is the dumbbell fly, but as far as chest growth goes, most people can build big chests more efficiently with the bench press, push-up, and dip without needing any extra isolation lifts.

The Skull Crusher vs the Overhead Extension

Then I tried typing in “skull crusher” and the disparity disappeared. Turns out that people are just separating the words now. The “skullcrusher” isn’t becoming less popular, it just switched it’s name to “skull crusher.”

What’s interesting is that ten years ago, dumbbell and barbell curls were about twice as popular as skull crushers and overhead extensions. But over time, the triceps lifts have caught up to the biceps lifts.

The Glute Bridge vs the Hip Thrust

The glute bridge and hip thrust seem to both be gaining popularity, and quite quickly, too. Of the two, the hip thrust is more popular. That’s a bit surprising to me because it’s a bit of a hassle to set up for hip thrusts, a bit harder to load heavy, and they often require specialized equipment to do properly.

However, hip thrusts pale in popularity next to the squat. The squat is likely a better lift for building bigger hips than the hip thrust, so that makes sense. I suspect we also have a lot of men who are interested in squats but not hip thrusts.

If we look at people searching for how to build bigger legs versus a bigger butt, we see that peak butt popularity was in 2013, but even now, people are still far more interested in building a bigger butt than building bigger legs. But then it gets weird again.

People are equally interested in the best butt versus the best leg exercises. But if we’re most interested in building bigger butts, why isn’t that being reflected in our searches?

Anyway, it seems like both the Romanian deadlift and hip thrust are equally popular, which makes sense—they’re both used for a similar goal.

The Lateral Raise vs the Upright Row

Both the lateral raise and upright row are similarly popular, and both are more popular than the barbell curl. I wonder if this means that people care more about building broader shoulders than building bigger biceps.

But that is not so! More people search for how to build bigger biceps (red) than how to build bigger shoulders (blue). Although with declining searches for both (and for triceps, too), I fear that there’s some sort of disarmament happening among American men.

Of all the lifts I searched for, the squat is by far the most popular. Nothing even comes close. The next-most popular lift has less than half the search traffic. I knew the squat was popular, but I didn’t know it was this popular.

Even when compared against the other two powerlifting lifts, the squat is over twice as popular. This surge in popularity is fairly recent, too. The squat only really started to pull ahead as the most popular lift in 2013.

I wrote a somewhat controversial article about how big men should build their legs, talking about how much priority we should give the squat in our training programs. My argument was that squats are an incredibly important lift for building muscle and improving our health, but kind of irrelevant for improving our appearance, and not very good for improving our upper-body and back strength.

I argued that although all of us should squat at least a couple of times per week, most people give them too much emphasis in their training, especially when following classic strength training programs like Starting Strength and StrongLifts 5×5. Upper-body strength is important, too, and most people don’t give the bench press, overhead press, and chin-up enough attention.

It’s cool to see that I wasn’t totally off-base. Squats are the most popular lift by a landslide. Deservedly so, perhaps, but I’m surprised that chin-ups and overhead presses haven’t earned that same degree of popularity.

Another weird finding is that people are similarly interested in building their chests, backs, legs, and arms. If we rank their popularity, back comes first (51), then legs (47) and arms (47), and then chest (37). I wouldn’t have guessed that. But the weird thing is that people are more interested in bulking up their backs yet spend far more time searching about squats than chin-ups, pull-ups, and rows.

The answer might be butts. If we add “bigger butt” into the mix, we see that people—women, presumably—are far more interested in building bigger butts than anything else. Perhaps that explains why the squat is such a tremendously popular lift. But again, it makes me wonder why the other butt exercises, such as hip thrusts and Romanian deadlifts, are less popular.

And that’s cool. We’re pretty good at helping women building bigger butts, if that’s what they want to focus on. The squat is great for that, but there are a number of other lifts that are just as good, and perhaps even better.

Anyway, will any of this help us build muscle? Probably not. It’s a bit of an unusual post for us. But I was looking thus stuff up to sate my own curiosity, and I thought you might find it interesting, too.

If you want a customizable workout program (and full guide) that’s designed to help you gain muscle size, check out our Outlift Intermediate Bulking Program. Or, if you’re still skinny, try our Bony to Beastly (men’s) program or Bony to Bombshell (women’s) program. If you liked this article, I think you’d love our programs.