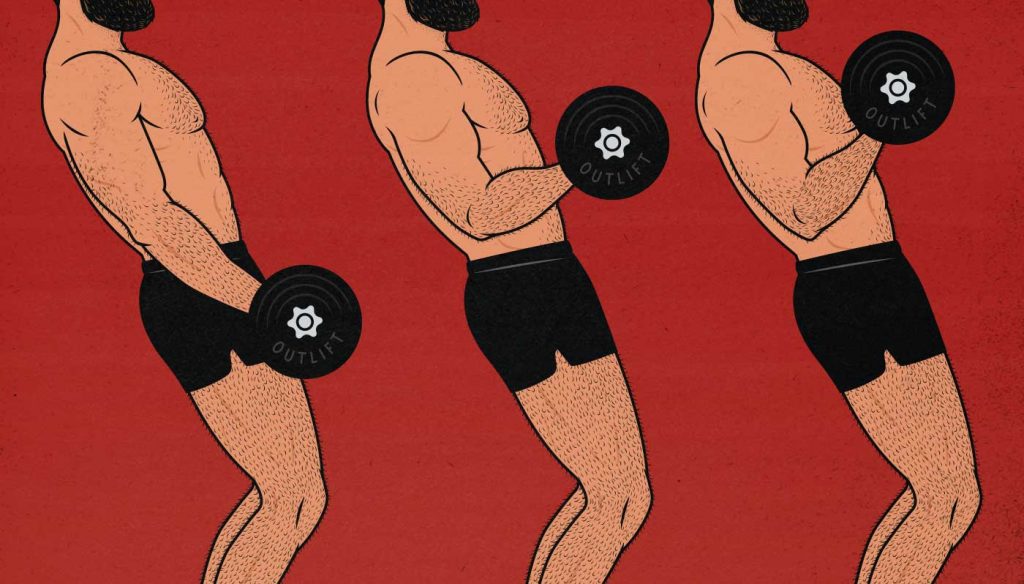 Our biceps are the limiting factor in even the humblest barbell and biceps curl variations, and so every variation of curl will reliably provoke at least a little bit of biceps growth. The only problem with most curl variations is that they’re relatively easy at the bottom of the range of motion, when our biceps are stretched. This is a problem because that’s by far the most important part of the range of motion for stimulating muscle growth. To make matters worse, the chin-up has the same problem, and underhand rows are even worse.

That’s where the preacher curl comes in. It allows us to fully extend our arms at the bottom of the lift, and it challenges our biceps quite a lot in that stretched position. This makes it a great curl variation for building bigger biceps. Perhaps the best variation of all. As a result, most bodybuilding gyms have a preacher curl station, and many biceps aficionados even buy one for their home gyms.

Fortunately, you don’t need a preacher curl station. In this article, we’ll show you how you can get the benefits of the preacher curl with just a barbell and some body English.

When doing research for our article on strength curves, it became evident that the barbell curl is quite good at stimulating muscle growth in our biceps. No big surprise there, of course. However, it also became clear that the preacher curl is likely even better. The reason being that the preacher curl does a better job of challenging our muscles in a stretched position.

If we look at this meta-analysis comparing isometric lifts done at different muscle lengths, we see that lifts that challenge our muscles in a stretched position stimulate nearly three times as much muscle growth. These research findings aren’t all that surprising, either. Mechanical tension is the main factor that stimulates muscle growth, and when our muscles are stretched, both passive and active tension are added together, raising the overall tension higher. Therefore, if we challenge our muscles in a stretched position, we get more mechanical tension and thus stimulate more muscle growth.

For another example, we can compare hip thrusts against squats. Hip thrusts challenge our glutes in a contracted position, whereas squats challenge them in a stretched position. A recent study found that squats produce around twice as much muscle growth as hip thrusts. It’s possible that this difference in muscle growth is due (or partially due) to the difference in the strength curves of the lifts.

Unfortunately, the three main lifts that we use to train our biceps—the biceps curl, the chin-up, and the row—aren’t very good at challenging our biceps in a stretched position. That’s where the preacher curl comes in.

The Benefits of the Preacher Curl

In the 1960s, the bodybuilders Vince Gironda and Larry Scott invented something called the “Scott Bench” to help them build bigger biceps. And it worked. Larry Scott won the Olympia, becoming the top bodybuilder in the world, famous for both his biceps and forearm development—both of which he trained on this special bench.

Due to Larry Scott’s success as a bodybuilder, the “Scott Curl” gained popularity among other top bodybuilders, including Arnold Schwarzenegger. It then trickled down to bodybuilding gyms, and has been a staple of bodybuilding for over fifty years now, most commonly referred to as the preacher curl.

With modern research showing that challenging our muscles at longer muscle lengths produces markedly more muscle growth, we now have a way to explain what bodybuilders have known all along: preacher curls are amazing for building bigger biceps.

That filled me with a feeling of great dismay, for I train at home, and my home doesn’t have a preacher curl bench. I’m also not particularly inclined to buy one, given that it takes up quite a bit of space and is only useful for two lifts: preacher curls and reverse preacher curls.

So I got to thinking. All we need to do is increase the moment arm on our elbow joints at the bottom of the range of motion. What if we lean back while scooching our knees forward, similar to when doing sissy squats?

To my great and continued surprise, it worked. Not only did the barbell curl became much harder at the bottom of the range of motion, but the lift actually felt quite sturdy and easy to perform.

If we lean back while doing barbell curls, a few interesting things happen.

Just a little bit of backward lean did the trick. When doing the above illustration, I traced my ankle and knee angles to make sure it was accurate. I’m sure it will be a bit different for everyone, but that’s a good place to start.

You’ll notice that when doing these curls, it’s possible to rest the barbell on your thighs at the bottom, similar to how you’d rest at the bottom of a preacher curl. I tried my best not to. I tried to keep tension on my biceps throughout the entire set.

What was surprising, though, is that the lift felt really good, my biceps got worked quite hard, and I had an unusual amount of biceps soreness the next day. In fact, the soreness I felt reminded me of back when I would blast my biceps with preacher curls. I hadn’t had that feeling since I’d switched to using a barbell home gym.

I tried looking this lift up. I couldn’t find it. Until a name emerges, I figure we can call these leaning barbell curls “sissy curls.” After all, it’s a position similar to the sissy squat, which is another lift that Larry Scott is known for. And, being frank, doing barbell curls this way looks a bit odd. Mind you, the purpose of this lift is to give guys using barbell home gyms an alternative to the preacher curl. The only person who might laugh at you is you.

I asked Marco to try these curls out to see what he thought. After all, Marco is the experienced strength coach, he’s the one with the health sciences degree, and he’s the one who trains college, professional, and Olympic athletes. Marco approved. He thought the logic behind sissy curls made sense, and when he tried them out, he found they worked his biceps quite hard.

Mind you, given that I may have invented this lift, there’s certainly no evidence to suggest they’re better than barbell curls. The best we can do is test them and see. To do that, the hypertrophy expert Mike Israetel, PhD, has a few proxies for muscle stimulation that he uses to determine which lifts are best for building muscle:

There are also signs that a lift might be a poor choice:

These proxies don’t guarantee that a lift is good for building muscle, and they don’t guarantee that a certain lift is better than another. But these are the best rules of thumb that we have available, and they likely work better than some fancier methods of evaluating lifts, such as EMG research. Best of all, this allows us to test lifts ourselves, figuring out which lifts are best for us on an individual level.

For me, the sissy curl meets all of these criteria at least as well as the preacher curl does. My biceps are the limiting factor, they’re worked hard, and doing just a few sets makes them feel sore the following day. There’s no pain, surprisingly few balance issues. They feel great.

But I’d love to hear what you think.

Key Takeaways (& A Call for Help)

Barbell curls are a great lift for building bigger biceps. However, they don’t do a good job of challenging our biceps in a stretched position, which is the most important part of the range of motion for stimulating muscle growth. As a result, preacher curls may very well be the better lift for bulking up our biceps.

If we don’t have access to a preacher curl bench, we can seemingly create a similar effect by simply leaning back while doing barbell curls. This should allow us to stimulate more muscle growth in our biceps.

To be clear, I’m not trying to say that these are the best curl variation. I’m not sure if they stimulate more muscle growth than a traditional barbell curl. But I think they might be better for stimulating biceps growth than the traditional curl. And I’m curious to test them out and learn more.

It would be a great help if you could try these out. Then, using the proxies described in the previous section, let me know what you think.

Marco Walker-Ng is the co-founder and strength coach of Outlift, Bony to Beastly, and Bony to Bombshell, and is a certified trainer (PTS) with a Bachelor's degree in Health Sciences (BHSc) from the University of Ottawa. His specialty is helping people build muscle to improve their strength and general health, with clients including college, professional, and Olympic athletes.