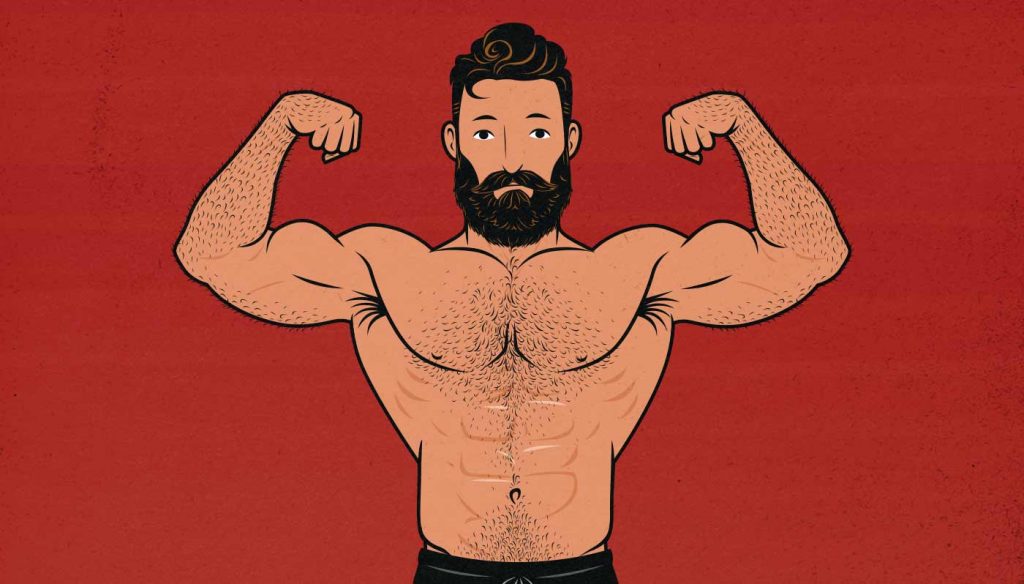 Both chin-ups and biceps curls are sorely underrated. Chin-ups are easily worthy of being given the same lofty position as the squat, bench press, and deadlift, and yet they’re left out of most strength training programs. According to most strength coaches, curls are even more of a Pariah, but at least most guys who want bigger biceps know to do them.

To be fair, strength training programs aren’t designed to help guys build bigger biceps, and so it makes sense that they aren’t very good at it. But who wouldn’t want bigger biceps?

In this article, let’s compare the chin-up against the curl for biceps growth, and then talk about how to build a biceps bulking routine around them.

Chin-ups can be a great biceps exercise. In fact, they can even be a great main exercise for our biceps: they’re a big, heavy compound lift that puts our biceps through a large range of motion … sort of, and sometimes.

Chin-ups can be a great exercise for our biceps, but it really depends on how we do them.

With chin-ups, our biceps are in a great position to contribute to the lift. In fact, our hands are in nearly the same position as they are when we’re doing biceps curls. As a result, we’d expect that position to be ideal for biceps growth.

With pull-ups, on the other hand, our hands are rotated away from us, reducing the leverage that our biceps have. In this case, it’s our forearm muscles—our brachialis and brachioradialis—that will be working to flex our arms.

How much of a difference does that make? If we look at the muscle-activation (EMG) research of Bret Contreras, PhD, we see that weighted chin-ups are around 50% better at stimulating our biceps than weighted pull-ups:

The next thing to consider is the range of motion we’re using. As a general rule of thumb, when we’re trying to grow a muscle, we want to train it through a large effective range of motion.

With chin-ups that means starting from a dead hang, with our biceps stretched out to 180 degrees, and then pulling our chests all the way to the bar, contracting our biceps fully, like so:

However, the chin-up is a compound lift, and we’re moving at both the elbows and the shoulders. This complicates things because our biceps attach to our shoulders and forearms. As we flex our arms, our biceps contract, but as we pull our elbows in closer to our torsos, our biceps get longer. So as we pull ourselves up the bar, our biceps are only getting slightly shorter. There isn’t a big change in muscle length.

Finally, because chin-ups are a compound lift, we’re working several different muscles at once, any of which can be our limiting factor on the lift. Our muscles only grow when we challenge them, and the different muscles involved in the chin-up are all challenged to different degrees. For example, if we fail because our lats aren’t strong enough to bring our chins over the bar, perhaps our biceps are still a few reps away from failure. Maybe our biceps haven’t been challenged enough to provoke a robust hypertrophy response. We could be missing out on quite a bit of biceps growth.

To be clear, chin-ups are quite challenging for our biceps. Most people will get a good biceps stimulus when doing chin-ups. But because our biceps aren’t necessarily our limiting factor, we can’t guarantee that they’re getting a strong enough stimulus to yield maximal growth.

Biceps curls are certainly the most popular biceps exercise, and they’ve earned it, too: they allow us to work our biceps through a large range of motion with no movement in our shoulder joint, meaning that we get a good biceps stretch at the bottom and a good contraction at the top.

The sticking point of the biceps curl tends to be in the middle of the range of motion, when our forearms are horizontal. That’s both the hardest part of the lift (peak of the resistance curve) and also where our biceps have the best leverage (peak of our strength curve), flattening the strength curve. Even though we usually fail the lift at that midpoint, having a flatter strength curve allows us to lift more weight.

Because the biceps curl can be loaded fairly heavy, even though it’s a single-joint “isolation” exercise, it’s actually a pretty good lift for strengthening our upper-back muscles and posture. As we’re curling the barbell up, it will try to round our back forward, and so our back muscles will need to hold strong. In that sense, it strengthens our back in the same way that the deadlift does. The heavier biceps curl variations share the most load with our backs, and so the barbell curls and EZ-bar curls tend to work more overall muscle mass.

So even though the barbell curl is often thought of as a bodybuilding and aesthetics lift, they’re actually pretty great for our general strength and posture. They’re a great lift all around.

However, as we mentioned above, lifts that load up our muscles when they’re stretched tend to be best for stimulating muscle growth. Problem is, neither the barbell curl nor the chin-up loads our biceps in a stretched position, and so neither has a perfectly ideal strength curve for hypertrophy. That’s where lifts like the preacher curl come in, where the lift is hardest when our biceps are stretched.

So, as with chin-ups, there are a number of different ways that we can curl, and each have their own advantages and disadvantages. Here’s what we see in Dr Contreras’ muscle activation research:

Anyway, what we’re seeing here is that none of the curl variations are working our biceps as hard as weighted chin-ups:

The difference is quite stark, too. We’re seeing 50% more peak muscle activation in chin-ups than barbell curls.

Plus, one problem with EMG research is that muscle activation levels are higher when our muscles are shortened. That’s a problem because it’s when our muscles are stretched that we stimulate the best muscle growth. As a result, we’d expect lifts like the preacher curl, which are easy at the top (the contracted position) and harder at the bottom (the stretched position), to fare poorly in EMG research, but to produce a ton of biceps growth nonetheless.

Perhaps the biggest advantage to biceps curls, though, is that our biceps are the main muscles being worked, and are thus guaranteed to be our limiting factor. With chin-ups, we could fail because our upper backs aren’t strong enough, which is great for bulking up our upper backs, but our biceps might not be challenged enough to grow. If we take a set of curls to failure, it’s our biceps that will be brought to failure. Curls, then, are perhaps the best way to ensure that we’re working our biceps with a high enough training volume.

So to quickly summarize, there are some notable advantages to curls:

How to Build Bigger Biceps

If we compare chin-ups and curls for biceps growth, we see that each lift is bringing something special to the table:

As a result, the best way to bulk up your biceps is to focus on getting stronger at chin-ups over time. Treat them like you do your other big compound lifts, and gradually add reps, sets, and weight.

However, to speed that process up, you can also add in biceps curls and preacher curls. They work your biceps in a different way to chin-ups, and the extra volume should yield extra growth.

For example, if we look at this study, we see that adding in biceps curls after lat pulldowns produced nearly 60% more arm growth. We could expect a similar result from adding curls after our chin-ups. And we may expect even better results if we added in preacher curls alongside our chin-ups.

Overall, chin-ups are better for building muscle in our entire upper bodies, and they’re great for building bigger biceps, especially if we do them with an underhand grip and a full range of motion. Biceps curls, on the other hand, are a more reliable way to specifically bulk up our biceps—especially if we factor in time, energy, and fatigue. Heavy curls also do a decent job of strengthening our upper backs, making them a great overall bulking lift.

To get the best biceps growth, then, it’s best to use chin-ups as our main compound lift and then add curls to the end of our workouts. They both stimulate our biceps in slightly different ways and complement each other well. Interestingly, preacher curls may be the best curl variation to combine with chin-ups, given that their strength curve is so good for biceps hypertrophy.

Shane Duquette is the co-founder and creative lead of Outlift, and is the creator of Bony to Beastly and Bony to Bombshell, where he has eight years of experience helping nearly 10,000 naturally skinny people bulk up. He has a degree in Design Theory (BDes) from York University and Sheridan College, and lives in Toronto (Canada) and Cancun (Mexico).