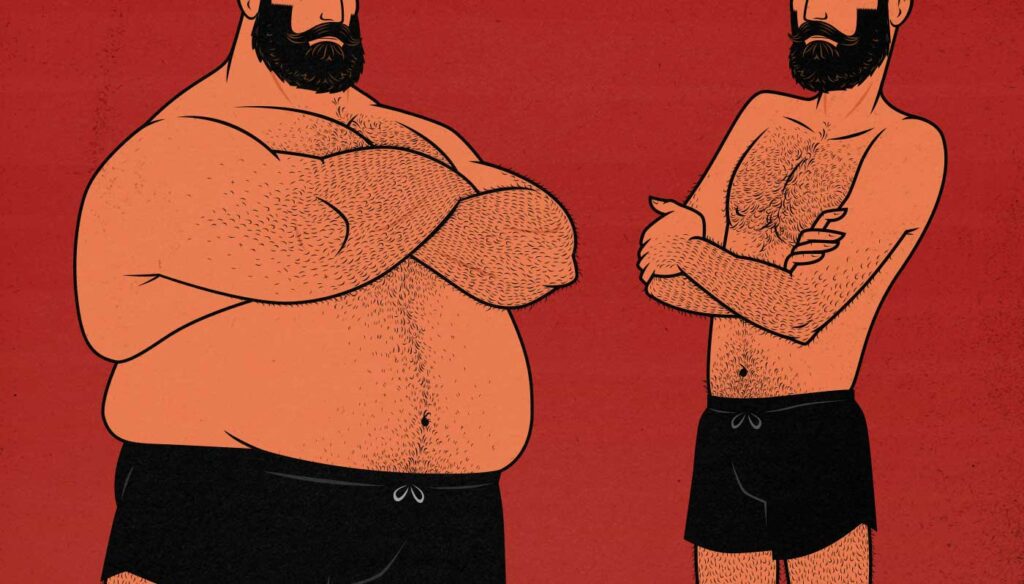 There’s a common rule of thumb that we should get lean before we bulk, and then stop bulking once we reach around 20% body fat. The idea is that as we get leaner, our insulin sensitivity improves, allowing us to make leaner muscle gains. And then as we bulk up, our body fat percentage gradually rises, our insulin sensitivity falls, and we begin to gain proportionally more fat.

But there’s new evidence that calls this idea into question. Two researchers, Greg Nuckols, MA, and Eric Trexler, PhD, have been going through hypertrophy research to see which body-fat percentages tend to yield the leanest muscle growth. I spoke with them and they shared their early results and recommendations, which are already creating waves among the top experts.

So, does having a higher body-fat percentage make it harder to build muscle leanly?

Greg Nuckols and Eric Trexler are the hypertrophy researchers who founded Monthly Applications in Strength Sport (MASS), along with Eric Helms, PhD, and Mike Zourdos, PhD. They specialize in reviewing muscle-building and strength research, and they’re known for making meta-analyses out of the data in the studies they review.

For example, they took all of the research on isolation lifts, many of which lacked the statistical power to find any benefit. But when added together, the benefit not only became statistically significant but also quite large, showing around 50% more muscle growth by adding in isolation lifts.

Now they’re looking into the idea that being at a lower body-fat percentage improves our insulin sensitivity, allowing us to build muscle more leanly. They’re still in the middle of going through the research, but so far, it seems that we’ve had it backwards.

Most bodybuilders believe that if we let our body-fat percentage drift too high while bulking, our declining insulin sensitivity will make it harder to build muscle, causing more of the weight we gain to be stored as fat. That’s why we often hear the advice to stop bulking at 20% body fat and then cut back down to 10–15% before we start bulking again. The idea is that by keeping ourselves within that healthy range, we can make leaner gains.

The problem is, that doesn’t seem to be true. In fact, the opposite seems to be true.

The first part of this idea is that having a higher body-fat percentage makes it harder to build muscle. If we look at sumo wrestlers, though, we see people with high body-fat percentages who have the highest degrees of muscularity ever measured. We see a similar body composition among football linemen. Some of the top powerlifters also fit that mould.

So it’s clear that having a high body-fat percentage doesn’t prevent us from becoming muscular or strong. In fact, it seems that the opposite is true. Gaining a ton of weight makes it more likely that we’ll gain muscle and strength.

Cross-sectional data [indicates] that body fat’s impact on fat-free mass accretion is, if anything, more permissive than inhibitory.

It seems that the higher our body-fat percentage is, the leaner our muscle gains are while bulking. Here’s a graph from the upcoming research that Eric Trexler, PhD, and Greg Nuckols, MA, have been working on:

This data comes from Dr Brad Schoenfeld’s study on how protein timing affects muscle growth. But what Greg did was organize the participants by body-fat percentage to see how lean their muscle gains were. Surprisingly, it shows that the people who had a higher body-fat percentage gained more muscle and less fat. Here’s what Greg told me:

Gains in lean mass are basically the same for everyone, but lean people tend to gain some fat (suggesting they are in a surplus), and heavier people actually tend to lose some fat.

As they go through more research, Greg told me that the effect is growing starker. We see this same effect in various studies, both on highly trained athletes, such as football players, and in everyday folks who lift weights. Even people with bonafide insulin resistance seem to be able to gain muscle quite leanly.

Does This Change How We Should Bulk?

This new research is fascinating, but I’m mainly interested in how it changes how we should approach building muscle. So I had a few questions for Eric Trexler about what that meant for people who are skinny, skinny-fat, or overweight. And also what it means for intermediate lifters who are already fairly lean and muscular. What’s the best way for them to continue improving?

How Should Skinny People Bulk?

The good news is, Eric thinks that naturally skinny guys may have a lower BMI because we’re naturally resistant to fat gain. In that case, because our body-fat percentage is already at a level that’s natural for us, we’re able to make fairly lean gains.

Skinnier people getting leaner gains hasn’t been proven, but it lines up with our experience helping a little over 10,000 skinny people bulk up. We tend to see fairly lean gains. Not always, but most of the time. It seems that we often have a genetic predisposition to defend lower body-fat percentages, and that predisposition only improves as we get into the habit of lifting weights and eating better diets.

There probably is a biological [body-fat percentage] range that we defend, but it might not necessarily be the body-fat you’re at when you start trying to change your physique.

Plus, the argument isn’t that having a higher body-fat percentage is good, just that the more out of shape we are, the easier it is to make improvements. And it seems likes that may apply to muscle growth, too. The less muscle mass we have, the further we are from our genetic potential, and so the faster we can build muscle.

So it’s possible—although not proven—that because we’re starting skinny, we’re able to build muscle faster, perhaps allowing us to gain less fat even while bulking quite aggressively.

How Should Overweight People Bulk?

If someone is overweight and eager to build more muscle, as is common with sumo wrestlers, linemen, and powerlifters, they can expect to gain muscle quite well. However, if the goal is to be healthy, it probably makes sense to, at some point, get down to a healthier body-fat percentage. After all, for most people, as rad as it is, muscle isn’t everything.

The good news is that the permissive effect that a higher body-fat percentage has on muscle growth works in both a calorie deficit and surplus. So if someone is overweight, they’re often able to gain muscle quite well even while losing weight. Again, it seems that the more out of shape we are, the easier it is to make improvements to our body composition.

How Should Skinny-Fat People Bulk?

This is the one that had me excited. We’ve often recommended that skinny-fat guys start by cutting down to a body-fat percentage of around 15%, trying to build a bit of muscle as they go. The problem is, losing weight when we already feel skinny can make us feel even skinnier. It can be demoralizing.

For “skinny-fat” people, I think preference could dictate the decision to cut or bulk first, and either route could result in similar success.

What this new research shows is that it’s perfectly okay to start by focusing on building muscle—by bulking. The gains can come quite leanly, so there’s no real downside to it. And then once we feel big and strong enough, we can trim off the fat to reveal the muscle underneath.

So if you’re skinny-fat, you have more freedom to follow your preferences. Start with a bulk, start with a cut—whatever you prefer. Your body-fat percentage doesn’t matter. And that’s great news. That’s why I’m stoked.

How Should Intermediate Lifters Bulk?

Okay, so here’s the tricky part, and probably where most guys go wrong. The standard advice is to cut until we’re quite lean—say 10% body fat—and then to bulk until we get to somewhere in the neighbourhood of 15–20% body fat. The problem is, when we cut down to a body-fat percentage that’s lower than our bodies are comfortable at, our bodies will prioritize regaining that fat.

For example, let’s say that when you’re in the habit of lifting weights, eating a good diet, and getting good sleep, that your body-fat tends to “naturally hover around 14%, with a hint of abs.

This new research suggests that there’s no need to worry about getting super lean before bulking and that having a higher body-fat percentage won’t harm our ability to build muscle leanly.

In my opinion, the important point is that people absolutely shouldn’t feel like they are “supposed” to cut first based on some physiological rationale related to hypertrophy

If you want a customizable workout program (and full guide) that builds in these principles, check out our Outlift Intermediate Bulking Program. Or, if you’re still skinny or skinny-fat, try our Bony to Beastly (men’s) program or Bony to Bombshell (women’s) program. If you liked this article, you’d love our full programs.

Shane Duquette is the co-founder and creative lead of Outlift, Bony to Beastly, and Bony to Bombshell, and has a degree in design from York University in Toronto, Canada. He's personally gained 65 pounds at 11% body fat and has ten years of experience helping over 10,000 skinny people bulk up. 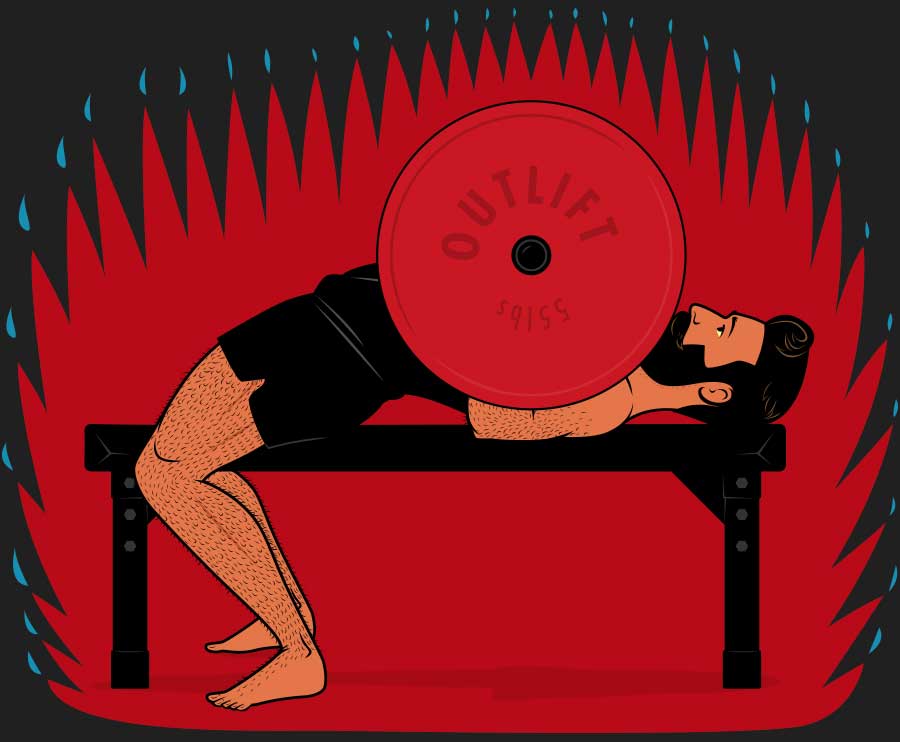