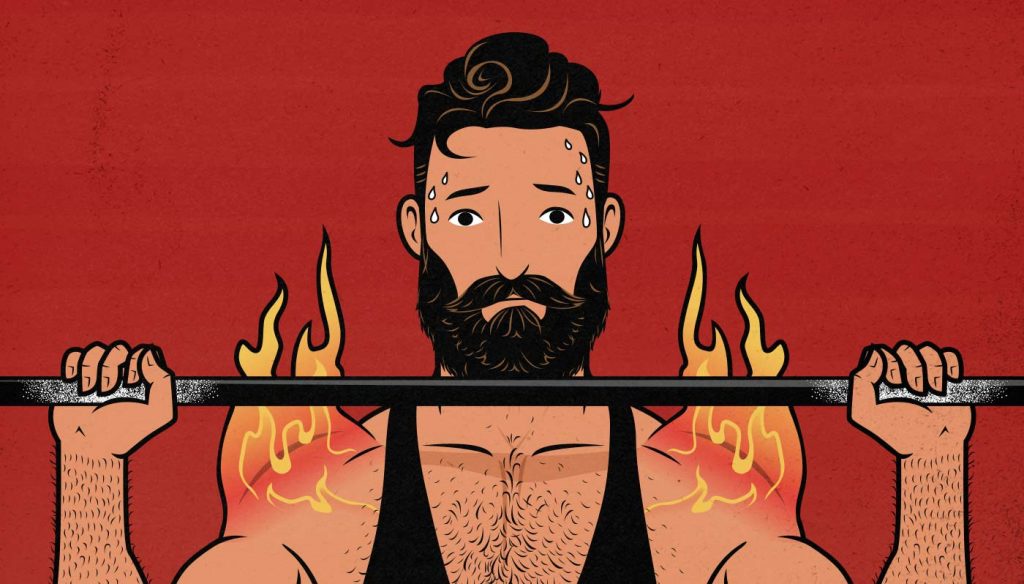 Recently, research has been coming out showing that long rest periods between sets are best for building muscle. With longer rest times, our muscles can better recover their strength between sets, allowing us to maintain more of our performance from set to set. More weight lifted for more sets means more mechanical tension, higher training volumes, and thus more muscle growth. Because of this, most bodybuilders rest 2–5 minutes between sets.

But a decade ago, short rest times were thought to be best for building muscle. Bodybuilders would rest just 30–60 seconds between sets because it gave them better muscle pumps, kept their workouts short, improved their fitness, and, they thought, helped them build more muscle.

The Benefits of Long Rest Times

The reason long rest periods are good for building muscle is that they give us a chance to catch our breath and recover our strength between sets. If we don’t catch our breath between sets, we might be limited by our cardiovascular systems instead of by the strength of our muscles, and so we might cause the wrong type of adaptation—we’d grow fitter instead of stronger. And if we don’t recover our strength between sets, we won’t be able to lift as heavy for as many reps, putting less mechanical tension on our muscles. We’d still be stimulating muscle growth with every challenging set, but we’d need to do more sets to make up for the dwindling training volume.

However, fully recovering our strength between sets can require monstrously long rest periods. A 2020 study found that resting eight minutes between sets allowed people to maintain more reps from set to set than five-minute rests, and it’s unclear if that’s even the limit. Imagine how many sets you could do within that same timeframe. Even if you aren’t getting as many reps in later sets, the overall training volume would still be much higher, presumably leading to more muscle growth within the same timeframe.

The next thing to consider is strength. Gaining strength isn’t just about gaining muscle, it’s also about training ourselves to contract our muscles as forcefully as possible. To practice that, we need to be starting each set feeling fairly fresh. This is why strength trainees often leave a couple of reps in reserve, rest for at least a few minutes between their sets, and stop doing sets before they get too fatigued. It’s conceivable that if we bring this mindset into our hypertrophy training, we’d learn to lift heavier weights, allowing us to stimulate more muscle growth with every set.

All three of these points make logical sense, and all three were subsequently backed up by well-conducted research, leaving us little doubt that longer rest times can certainly help us build more muscle:

Now, we’re seeing that both 3-minute and 5-minute rest periods were tested. 2-minute rest periods are often tested as well. But there’s no magical number of minutes we need to wait. It all depends on how heavy the lift is, how big the range of motion is, how many reps we do, how fit we are, and how much time we’re willing to spend waiting between sets.

For example, the conventional deadlift uses a larger range of motion and engages more of our upper-back musculature than the sumo deadlift, causing it to use 25-40% more energy (study). As a result, we’re often able to eke out more reps and get away with shorter rest periods when using a sumo stance. Mind you, conventional deadlifts might be the better lift for building muscle and improving our fitness. And as we get stronger, deadlifts will only get harder on our cardiovascular systems, allowing us to get even more robust fitness improvements from lifting weights.

So we can imagine how a skinny new lifter with a history of doing cardiovascular training being able to recover super quickly between sets, perhaps to the point where they can get away with doing circuits and supersets. On the other hand, a grizzled powerlifter who only ever lifts in low rep ranges might need to take a nap between sets. Hell, he may even get winded halfway through a set of ten.

Longer rest times allow us to put more mechanical tension on our muscles with every set, making each set very efficient. Longer rest times are also better for our improving our maximal strength. To get those benefits, we should wait until our breathing has returned to normal between sets, which can take anywhere from 2 to 5 minutes, and sometimes longer.

The Benefits of Short Rest Times

So, first of all, there may be a myth to banish. One of the reasons that short rest times were thought to cause more muscle growth is because they were associated with elevations in growth hormone. This idea even had a name: the hormone hypothesis. Bodybuilders would design their entire workout routines to maximize anabolic hormone production. Thing is, despite its awesome name, recent research shows that growth hormone doesn’t cause extra muscle growth.

It seems like higher training volumes cause more muscle growth and more growth hormone production. The growth hormone isn’t causing the muscle growth, it’s merely being produced alongside the growth. The short rest times were allowing bodybuilders to fit more high-rep sets into their workouts, raising their training volume up way higher, and it was that extra training volume that was making their bodybuilding routines so effective. Now, that doesn’t mean that short rest times aren’t good for hypertrophy, it just means that the mechanism may have been misunderstood. In this case, it seems like the shorter rest times were merely a way to do more work in less time.

What’s neat about workouts designed to pack a ton of work into a short timeframe, though, is that they cause us to adapt by storing more fuel in our muscles—sarcoplasmic hypertrophy. We aren’t just improving our maximal strength, we’re also improving our ability to do more work in less time. And both of those adaptations will make us bigger, more capable, and better looking.

Hypertrophy training is the combination of increased strength and muscular work capacity.

Sarcoplasmic hypertrophy is sometimes thought of as being the bad type of muscle growth. People assume that it will lead to softer muscles or fewer performance benefits, but that isn’t true. First, since the growth is still taking place within our muscle fibres, there’s no reason to think that our muscles would feel any different. And second, developing a greater work capacity is an incredibly useful performance advantage.

Plus, muscle growth aside, short rest times can also be incredibly healthy, especially if we don’t do very much dedicated cardiovascular training. Short rest times are great for improving our general fitness, work capacity, and oxygen delivery. That’s why a lot of general fitness lifting programs use circuit training with short rest times between each exercise. You also see this same idea being used with high-intensity interval training (HIIT), where cardiovascular fitness is improved by doing a series of short bursts of intense work with inadequate rest periods between them. That’s not so different from doing a few ten-rep sets of squats with 1–2 minutes of rest between them.

But we do care about muscle growth, and it would suck to stay weak and skinny just for the sake of living longer and healthier lives. Fortunately, by using higher-rep sets and shorter rest times, if we do it right, we can get more muscle growth than with longer rest periods. For example, this study found that using shorter rest times roughly doubled muscle growth:

If we use examples of extremely short rest periods, such as drop sets, where we lift to failure (or close to it), reduce the weight by 20%, and then immediately start lifting again, we see some nifty research findings:

In this case, what we’re seeing is that drop sets can allow us to build more muscle in less time, perhaps simply by increasing the number of challenging sets we’re doing in our workouts—by increasing our training volume.

With shorter rest times, we can do more sets in less time, making it a great way to build tons of muscle with short workouts. For example, if we’re pressed for time, we could do a single heavy set and then sneak in a few drop sets. That might mean doing four sets instead of three, sure, but we’d be finished all four sets inside of two minutes, whereas it might take us a good ten minutes to get through three sets with longer rest periods.

Most research finding an advantage for shorter rest times either had the short-rest groups lifting in higher rep ranges or doing more sets. It appears that training volume drives muscle growth, and so it’s up to us whether we want to accrue that volume with long or short rest periods (study). Cramming a few sets together with short rest periods can be an efficient way to boost our training volume.

Of course, we don’t need to pick one or the other. We could use our big compound lifts to train our strength, and then we could use our assistance and accessory lifts to train our work capacity, improve our fitness, and to get a good muscle pump going. We could also dedicate some of our training phases to building muscle by improving our work capacity, dedicate other phases to building muscle by improving our strength.

The trick, again, is to make sure that the various factors line up.

Another way to combine shorter and longer rest times is to use antagonist supersets or circuits.

Long rest periods are better for strength training, and they stimulate more muscle growth per set. To get those advantages, we should let our breathing return to normal between sets.

Short rest periods are better for improving our work capacity, and they stimulate more muscle growth per unit of time. To get those advantages, we can use strict rest times between sets, often around 1–2 minutes of rest for compound lifts, 30–60 seconds for smaller isolation lifts. We can also use drop sets, antagonist supersets, and circuits.

If we’re trying to build muscle, gain strength, and improve our health, it’s probably best to use both long and short rest times at various points in our training.