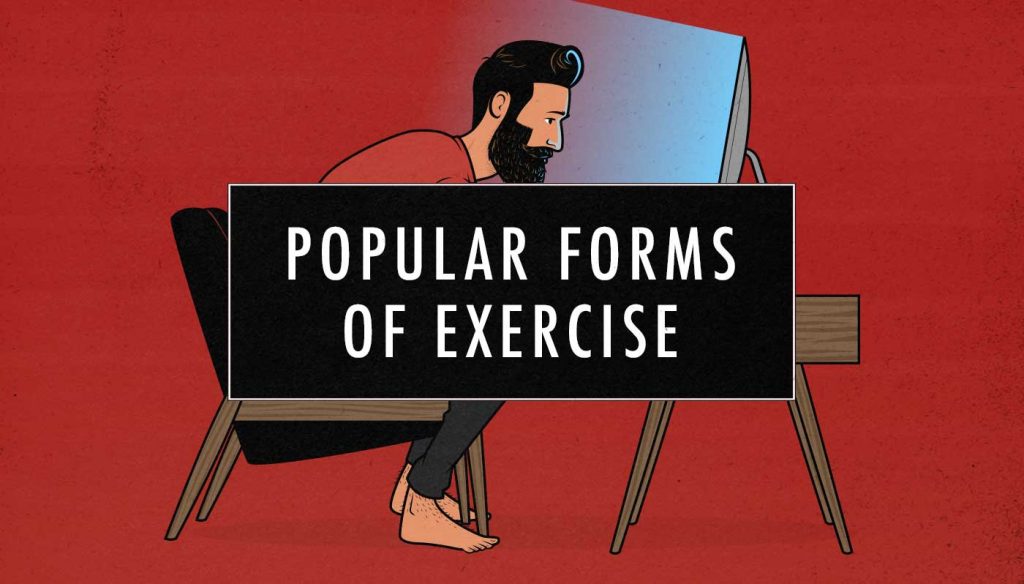 To answer all of these questions, we can look at Google Trends to see what information people are looking for online.

Bodybuilding peaked in popularity in July 2013 and then started a gradual decline, which is interesting. I wonder why it’s declining in popularity. What are people who want to gain muscle size and improve their aesthetics searching for instead? Or is there a shift away from training for size and aesthetics? (I doubt that.)

I thought it might be another style of training, such as CrossFit, that was gaining polarity instead, but that doesn’t seem to be the case. CrossFit is massively, massively popular, but it peaked at a similar time to bodybuilding and has been declining since then. So again, what are people looking for instead?

The other thing to consider is that gaining muscle and strength is crucial for our general health, and a recent study 70% of the American population doesn’t have enough muscle mass or strength to be healthy. Now, it’s not that we need to do bodybuilding, per se—strength training or CrossFit would be fine, too—but it would be worrying if all forms of resistance exercise were waning in popularity.

Next up is my favourite style of training, hypertrophy training, it looks like its popularity has ever-so-slightly improved over the past ten years. However, unfortunately, it’s not a very popular term.

Quite simply, hypertrophy training simply means: training to gain muscle size. It doesn’t have anything to do with competing on stage in a thong, spray tanning, dieting down to ultra-low body fat percentages, or training in a way that bodybuilding judges prefer.

To be clear, when most people say “bodybuilding,” they just mean training to build bigger and stronger muscles. Thing is, there are all of these little accidental nuances that can get mixed in, and that can get confusing.

For instance, to improve our overall attractiveness (at least for men), one of the most important things we can do is bulk up our necks. Same thing we wanted to build a tougher, stronger, and more athletic physique. Having a bigger neck would help us avoid concussions, knockouts, and brain trauma. But in bodybuilding, neck training isn’t factored into judging, and so neck training isn’t a part of bodybuilding culture or training.

For another example, you’ll see a lot of people criticizing “bodybuilding” for various reasons: too many exercise machines, too many isolation lifts, not enough barbell work, not enough compound lifts, not enough squatting and deadlifting. Or, worse, they’ll assume that bodybuilders are big but weak. It’s all nonsense, of course—bigger muscles are stronger muscles, and bodybuilding can have a foundation of big compound lifts. But even so, “bodybuilding” has a lot of baggage.

The Most Popular Bodybuilding Programs

To find the most popular bodybuilding programs, I tried plugging in all of the ones that are commonly mentioned around the internet, as well as the ones that we hear about the most. The three most popular bodybuilding routines seem to be Jeff Cavaliere’s Athlean-X, Gregory O’Gallagher’s Kinobody, Mike Matthews’ Bigger, Leaner, Stronger, and the Reddit phenomenon, nSuns.

Of these routines, it seems like Athlean-X is currently around 6.5x more popular than Kinobody, and then Bigger, Leaner, Stronger and nSuns are only around a quarter as popular as Kinobody. All of these brands and programs are incredibly popular, though.

What’s interesting is that, like us, none of these brands want to be associated with all the baggage that the term “bodybuilding” comes along with. Athlean-X is all about training like an athlete who’s rehabbing injuries, Kinobody promises a Hollywood physique, nSuns is rooted in 5/3/1 strength training, and Bigger, Leaner, Stronger is a sort of push/pull/legs split routine that’s marketed as being a strength training program for people who want to improve their appearance.

It looks like the popularity of the term “strength training” has been fairly consistent for the past ten years. We’re seeing seasonal fluctuations every year, but it always has similar peaks and valleys. Interesting. Makes me wonder which strength training programs are the most popular right now.

However, when we compare strength training against bodybuilding, it’s only about a third as popular. People are still far more interested in gaining muscle size than they are in gaining muscle strength, at least in terms of what they’re searching for.

The Most Popular Strength Training Programs

To find the most popular strength training programs, I tried plugging in all of the ones that are commonly mentioned around the internet, as well as the ones that we hear about the most. The three most popular routines seem to be Mark Rippetoe’s Starting Strength, Mehdi’s StrongLifts 5×5, and Jim Wendler’s 5/3/1 program.

If we compare the three programs over the past ten years, it seems like Starting Strength has always been the most popular strength training program. StrongLifts 5×5 briefly passed it in 2014 but has since fallen down to about half of Starting Strength’s popularity. That’s not surprising, given that Mehdi seems to have stopped coming out with new content.

Jim Wendler’s 5/3/1 program has been immensely popular this entire time, especially among the crew who consider themselves a bit more hardcore. There are other hardcore strength training routines such as Smolov that are incredibly popular, but 5/3/1 is far more popular still.

One final thing I’ll note here is that although it seems that these programs were at their peak popularity in 2012–2013, that’s not necessarily the case. What we’re looking at here are branded queries, where people are specifically typing in the brand name. With our own Bony to Beastly and Bony to Bombshell sites, they show that same surge around 2012–2013. But we have more traffic now than ever before, largely because our traffic has increased from unbranded queries—from people searching about how to gain weight or bulk instead of searching “Bony to Beastly.” This brings in more overall traffic and new readers.

Powerlifting has been steadily gaining in popularity for the past ten years. However, it’s still a relatively small term. It certainly doesn’t explain the falling popularity of bodybuilding.

Although, I suppose, if you consider CrossFit to be a competitive strength sport, and if you consider that it involves Olympic weightlifting lifts, then it’s much more popular than powerlifting.

Powerbuilding is the combination of both powerlifting training and bodybuilding training. There’s a huge emphasis on improving 1-rep-max (1RM) strength on the squat, bench press, and deadlift, but there’s also a ton of accessory work thrown in for the purposes of gaining overall muscle size and aesthetics.

It’s a neat idea, given that many powerlifters want to look muscular and many bodybuilders want impressive 1RMS on the big lifts. And so powerbuilding was steadily gaining popularity up until last year, at which point it has started to fall. What’s going on there?

If we look at cardio terms, we see that cardio has a huge uptick every January as people start their New Year’s resolutions, and then its popularity gradually fades until the next January comes around. Every type of exercise booms in January and collapses during November and December, but it’s especially exaggerated with cardio.

However, since LISS is a relatively uncommon term these days, I thought I’d toss in a common form of low-intensity exercise: jogging. We see that jogging has been falling slightly in popularity and that in the past couple of years, HIIT has overtaken it.

Cardio in general is doing quite well, too. A few years ago, bodybuilding was the more popular form of exercise. Nowadays, cardio has just ever so slightly edged it out.

With gyms closing, it makes sense that everyone is searching about building a home gym. What I’m curious about, though, is that if everyone is building home gyms now, will they continue using them for years to come? Will home gym training remain more popular even when gyms reopen?

If we compare the popularity of gym memberships and home gyms, we see that interest in both has been gradually rising together. It seems like people are just more interested in lifting weights in general. Speaking from our own experience, with the 10,000 people we’ve coached through our muscle-building programs, a little over half of the men train at commercial gyms, whereas most of the women prefer to train at home.

It looks like bodyweight training has hit an all-time high. It looks like before gyms starting closing, though, it was starting to fade in popularity. I wonder how this will play out in the coming years.

Resistance bands have been steadily climbing in popularity over the past ten years. If we compare them against the popularity of dumbbells and barbells, though, we see a bit of a different story.

The popularity of dumbbells and barbells has been skyrocketing compared to resistance bands.

As mentioned above, barbells and dumbbells have been seeing a steep rise in popularity over the past ten years, and are both similarly popular to one another. That makes sense. A pair of adjustable dumbbells is an easy way to build a versatile home gym in a small apartment, whereas a barbell home gym tends to be best for people who have a spare room, basement, or garage.

It seems like people are interested in both cardio and resistance training, which is good. An overwhelming amount of research shows that both cardiovascular and resistance exercise are crucial for improving our health and longevity (study, study).

If we look at cardio, we see that jogging and other forms of low-intensity steady-state cardio (LISS) are losing popularity compared to high-intensity interval training (HIIT). That makes sense. HIIT workouts are far quicker and more efficient. What some people may not realize, though, is that HIIT is brutally painful and tiring when done properly, whereas some forms of LISS (such as brisk walking) can be quite easy and relaxing. Neither is better or worse, though, and a mix of both is probably best.

When it comes to resistance training, weight training and calisthenics are both popular. What surprised me was that far more people are interested in gaining muscle size than general strength, and that “bodybuilding” is by far the most popular form of weight training. Interestingly, though, despite the fact that bodybuilding is somewhat of a vague term, the more precise term of “hypertrophy training,” which is the type of training designed to stimulate muscle growth, hasn’t caught on (yet).

This leaves me somewhat confused. If people are interested in improving their general health and cardiovascular fitness, I understand why CrossFit, HIIT, and jogging are popular. Everything lines up. But when we consider that just as many people are interested in gaining muscle size, why is is everyone doing CrossFit and Starting Strength? CrossFit is a fitness program and Starting Strength is a strength training program. These programs are good for what they’re designed for, but they’re not designed for building muscle, and they aren’t all that great at stimulating muscle growth.