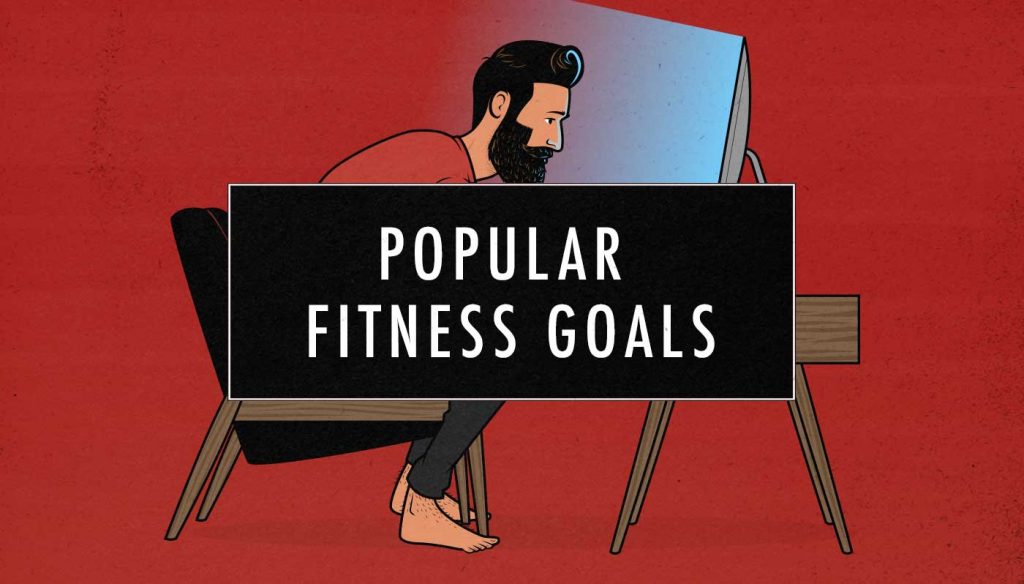 To answer all of these questions, we can look at Google Trends to see what information people are looking for online.

In this article, all I’m doing is going to Google Trends, looking up how search traffic has evolved over the past ten years for various health and fitness goals, and then pasting the graphs here. Will this help us build muscle? Probably not, no, but I found this interesting nonetheless, and I thought you might, too.

How to Gain vs How to Lose Weight

If we compare that against data from the American Heart Association, we see the actual prevalence of underweight vs overweight in the population of the United States:

So looking at the latest research, we see that around 11x more people are overweight than underweight. And if we include people who are obese, then it’s 24x more common for people to have problems related to their body-fat percentage being too high.

That means that if anything, people searching about issues related to being underweight are overrepresented compared to their prevalence in the population. It also explains why I had so much trouble finding information when I was underweight and trying to build muscle.

Again, unsurprisingly, about 3.5x more people are interested in losing fat than building muscle. This makes sense, of course. Most people are overweight, and a good way for them to improve their health and appearance is to lose fat. But muscle size and strength are important for our general health as well, and a recent study found that 70% of the American population isn’t muscular enough to be healthy.

(As for the terminology people prefer, it looks like “losing fat” is more popular than “burning fat,” whereas “building muscle” and “gaining muscle” are similarly popular.)

Bulking Vs Cutting vs Body Recomposition

Fat loss still remains more popular than building muscle when we look at more advanced terms, such as “bulking diet” vs “cutting diet.” What’s interesting is that we see that almost nobody is searching for “body recomposition diet” or “recomp diet.”

Another interesting thing is that if we add in “somatotype,” we see that people aren’t searching for these body types using the technical term for them. And that’s kind of reassuring, actually, because these somatotypes were pioneered by the discredited psychologist William Herbert Sheldon. When he tried to link people’s body types to their personalities, he failed.

What seems to have happened is that people still use the terms ectomorph, mesomorph, and endomorph to describe their body shapes, but they’ve divorced it from the debunked science that originated the terms. If we look at searches for “body type” versus “somatotype,” we see that most people aren’t using the technical term, but rather the more colloquial one. And that’s probably wise.

Our specialty is helping naturally skinny people gain weight and build muscle. We’re popular because of our Bony to Beastly and Bony to Bombshell programs. So I was curious about what terms within our niche were most popular.

So, first of all, if we look at the term “skinny-fat,” hardly anybody writes it quite that way, at least when typing it into Google. Most people search for “skinny fat,” without the hyphen. That confused me at first. But then once I started looking for it properly, it turned out to be the most popular search query. It’s about 3x more popular than the term “ectomorph” and 37x more popular than the term “hardgainer.”

What’s a little disappointing is that of those terms, the only term that actually has some scientific backing behind it is the term “hardgainer,” which describes somebody with an adaptive metabolism who has trouble gaining weight. Most of our clients are hardgainers, and that’s why they come to us.

Now, as we mentioned above, it’s not that there’s anything wrong with using the term “ectomorph.” It’s a handy way to describe a body shape. But it’s just a slang term for someone who’s naturally skinny. It’s neat that it’s become so popular.

If we narrow in on what ectomorphs and skinny-fat people are trying to do, we see that the disparity more or less disappears. There are a similar number of people searching for ectomorph workouts as skinny-fat workouts. There’s also a similar interest in working out as there is in dieting, which is nice since both exercise and diet tend to work synergistically.

If we compare bodybuilding against strength training, we see that most people are more interested in gaining muscle size than they are in gaining strength.

We see that same trend if we look at the popularity of related terms like “build muscle” and “get bigger” versus “gain strength” and “get stronger.” Here, too, building muscle is 5x as popular as gaining strength.

Mind you, outside of the context of powerlifting (where a specific type of strength must be cultivated), building muscle and gaining strength are the same thing. A bigger muscle is a stronger muscle, regardless of whether you lift in low, moderate, or high rep ranges. But even so, it’s nice to know what people are most eager to gain when they start weight training. And if the goal is to gain muscle, best to train for it directly by doing hypertrophy training.

Where Do People Want to Build Muscle?

As we covered in our article on the most popular lifts, people have a pretty balanced approach to building muscle. We see a similar number of searches about how to build a bigger back, chest, arms, and legs.

If we rank their popularity, back comes first (51), then legs and arms (47), and then chest (37). I wouldn’t have guessed that. I would have thought that building a bigger back would be the least popular search. I wonder what’s going on there. What’s far more interesting, though, is what happens if we include searches about building a bigger butt.

If we add in people searching for how to build a bigger butt, we see that people—women, presumably—are way more interested in building bigger butts than anything else.

And that’s cool. We’re pretty good at helping women building bigger butts (if that’s what they want to focus on). The squat is great for that, but there are a number of other lifts that are just as good, and perhaps even better.

According to data from the American Heart Association, 69% of the American population are either overweight or obese. This surely explains why so many more people are searching for information about how to lose weight than about how to gain it.

Mind you, it’s worth noting that to be healthy, we need to have a healthy body-fat percentage and enough muscle mass and strength. In fact, a recent study found that 70% of the American population isn’t muscular enough to be healthy. This means that the prevalence of being under-muscled is about the same as being over-fat. This isn’t being reflected in what people are searching for online.

When it comes to building muscle, losing fat, and improving our body composition, most people are searching for how to build muscle, lose fat, bulk up, and cut down. It’s rare for people to search about body recomposition, where the goal is to lose fat and build muscle simultaneously.