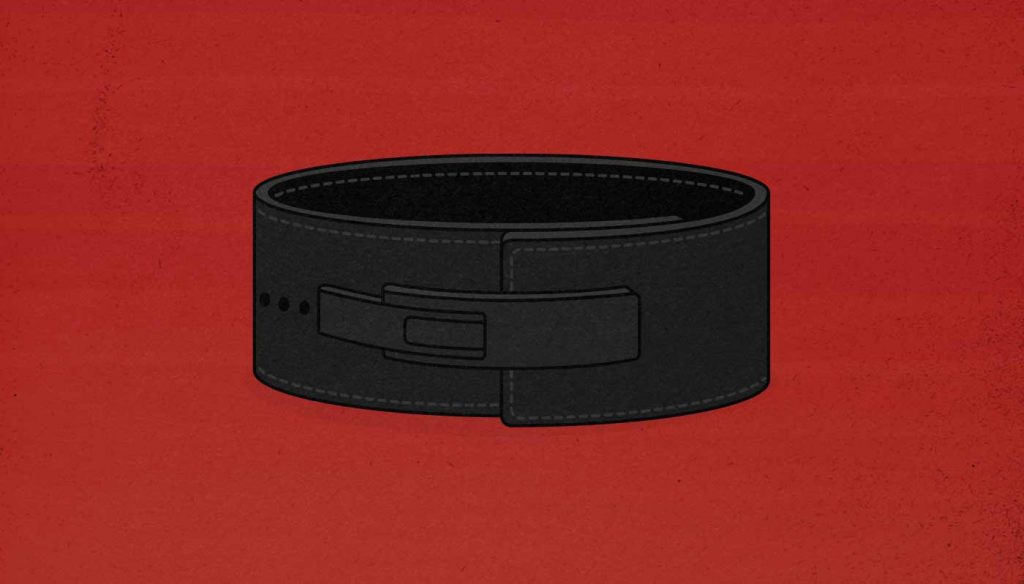 Some argue that we should wear lifting belts when training for size because they allow us to lift more weight while protecting our lower backs, and there’s some truth to that. If we can lift more weight because our spines are held rigid in a more neutral position, then that would certainly be an asset while bulking.

Others argue that we shouldn’t wear lifting belts outside of powerlifting because they prevent us from strengthening the muscles in our lower backs and cores. That doesn’t seem to be true, but lifting belts do indeed increase intraabdominal pressure, which isn’t necessarily a good thing for everyone. Furthermore, not all spinal experts recommend lifting belts, especially when our goal is merely to gain muscle size. So there’s some nuance here.

In this article, we’ll talk about:

The Advantages of Lifting Belts

Lifting belts give us something firm to brace against when we do the Valsalva manoeuvre, making our torsos more rigid, and improving our ability to transfer force from our lower bodies to our upper bodies. With lifts that are limited by core stability, such as the deadlift and overhead press, lifting belts can help us lift heavier weights and build more muscle.

Of all lifting gear, lifting belts probably give us the most bang for our bulks. Because they allow us to better stabilize our cores, they can help us in two ways:

Some people even like to wear lifting belts while doing the bench press because it helps them feel more stable. There’s no known mechanism for why a lifting belt would improve our bench press strength, but some lifters swear by it, and there’s no harm to it.

To illustrate how lifting belts can help while bulking, imagine that we can normally deadlift 315 pounds for eight repetitions. By wearing a lifting belt, we’d be able to bump that up to 345 pounds. Or, if we keep 315 pounds on the bar, we’d be able to add an extra couple of reps or sets. Either way, we’d provoke more muscle growth with that extra stimulation. We’d also be putting more load on our bones and tendons, making our bodies tougher. And we’d even be giving our cardiovascular systems a greater challenge, improving our fitness. That means more muscle growth, more strength grains, tougher bodies, and better general health.

The Concerns About Lifting Belts

One concern is that wearing a belt would take the load off of our lower backs, preventing them from getting as strong, and thus putting us at greater risk of injuring our backs outside of the gym. However, Dr Stuart McGill (the foremost expert in spinal health) found that the lower back muscles still work just as hard during compound barbell lifts when wearing a weight belt (study). A similar concern is that wearing a weight belt might stop our abs and obliques from growing stronger. However, again, McGill’s research contradicts that. Ab activation seems similar with and without a lifting belt.

However, McGill does bring up the concern that because lifting belts increase blood pressure, if someone were to wear a weight belt all day long, they might increase the incidence of varicose veins in the testicles (varicoceles), hemorrhoids, and hernias. However, he notes that “there has been no scientific and systematic investigation of the validity of these suggestions.” To get another perspective from an expert in varicoceles (which are super common among men), I asked a urologist about whether lifting belts could make them more likely to arise or more likely to worsen. He told me that it shouldn’t be a problem in the context of lifting because the rise in blood pressure would be so brief and intermittent. But again, there’s no good research on this. These are just educated guesses.

McGill also points out that if we’re training merely to improve our health, not to gain as much muscle size and strength as possible, then we may as well avoid lifting belts. After all, the myriad health benefits of strength training can be gotten with or without a belt (source). Most of all, he warns against wearing a belt becoming an excuse to lift with poor technique. If we’re deadlifting a heavy barbell, we should lift it safely, with or without a lifting belt. Be the charging bull, not the scared cat:

Finally, there’s never a dire need to get a lifting belt no matter how strong we get. Provided that we always let our limiting factor limit us, we won’t ever be in a situation where we’re lifting so heavy that we need a lifting belt in order to lift safely. If we decide against getting a lifting belt, our lower back may just limit our strength a little earlier, and that’s all. There’s nothing stopping us from safely deadlifting five hundred pounds whether we get a lifting belt or not.

I eventually did decide to get a lifting belt, and I’ve grown to love using it. My back feels sturdier and stronger, and it no longer gets fatigued as easily. On the other hand, Marco still lifts without a belt despite having lifted for over a decade. Even when coaching college, professional, and Olympic athletes, lifting belts are never a staple in his training. They’re completely optional.

And if we do have a bit of spinal flexion during our heaviest sets—which is probably fine—then we should at least keep it within the neutral range, like so:

Even with a lifting belt, we still need to lift with proper technique. The belt doesn’t necessarily protect us, it just allows us to hold ourselves more rigid in the proper position.

Wearing a lifting belt can also increase our blood pressure by a good 15–40%, meaning that it might be dangerous for people with blood pressure problems, or for people struggling with varicose veins, varicoceles, hernias, or hemorrhoids (although there’s no proof of this yet).

If you decide not to wear a lifting belt, rest assured that you can gain size, strength, and improve your health with or without a lifting belt.

When I first bought a lifting belt, I got a thick, double-pronged lifting belt. I found it annoying to put on, uncomfortable to wear, and if anything, it seemed to make lifting weights harder. After experimenting with it for a few workouts, I banished it to the closet, and whenever I needed to go in there to get a coat, I would kick it out of spite.

A few years later, after being reminded of the many benefits of lifting belts by this Stronger by Science article, I decided to give it another go. The first thing I realized was that I shouldn’t have gotten a double-pronged lifting belt. A single-prong or lever belt would have served me much better. The next thing I released is that all of the high-quality leather lifting belts are more than thick enough to withstand anything we can throw at them. There was no need for me to jump all the way to 13mm.

Of all the companies making lifting belts, Pioneer Powerlifting is generally considered the best (Along with Inzer and Best Belts), so I ordered their thin lever belt. It’s still several times sturdier than it needs to be, it’s far more comfortable than the thicker belts, and I can easily unlatch the lever to catch my breath and lower my blood pressure between sets. I love it.

For the record, General Leathercraft (aka Pioneer) is the company that makes the popular lever belt that Rogue sells, and so I’m sure those are great as well. The advantage of ordering directly from Pioneer, though, is that you get to get to choose all of the details, including the colours and also the thickness. Personally, I prefer a 6.5–10mm thickness to the default 13mm thickness.

Lifting belts tend to be a high-value purchase. A top-of-the-line Pioneer belt is under $100, you’ll use it every workout, and it will last your entire lifetime. So I’d prioritize getting a belt that you like over a belt that’s cheap.

When buying a lifting belt, go with a single-prong or lever belt. Good quality leather belts are generally best, and any thickness will do—even as thin as 6.5–10mm.

How to Use a Lifting Belt

The weight belt should sit right on top of your hip bones (iliac crest), which tends to be right over your belly button. The positioning doesn’t need to be exact, though, so you can shift it around for comfort.

The next thing you need to do is find the correct tightness. You want it to be tight enough to brace against, but you also want to be able to take a full breath into your torso so that you can brace properly. If your breathing feels restricted, it’s too tight. But then on the other hand, if breathing feels easy and comfortable, it’s probably too loose. You want to find that uncomfortable-but-still-breathing middle ground.

I had trouble finding the correct tightness at first, but with a bit of trial and error, it started to make sense. When the belt was too tight, my core was too restricted to properly brace against it. And then when the belt was too loose, it gave me no resistance when I braced. Once I’d tried the too-tight and too-loose settings, though, the correct setting became more obvious.

When it comes to doing the Valsalva manoeuvre, you probably already know how to do it. All you need to do is tighten up your abs as if an enemy were about to punch you in the gut. The only real trick is to make sure that you breathe into your belly and then to hold it there as you do your reps. If you’re doing low-rep sets, you might even hold a single breath through the entire set. Otherwise, take your breaths at either the top or bottom of the repetition. This bracing technique is the same as it always is. There’s no need to modify it when using a lifting belt. The belt is just there to add some external resistance to it.

Still, even though you already know how to brace, expect a steep learning curve. In fact, similar coffee, tequila, and pungent cheeses, lifting belts are rather unappealing at first. It’s only later that we fall in love.

As you get used to lifting with a belt, I’d recommend using it during all of your warm-up sets and lighter sets—perhaps even while curling. Not forever, mind you, just until wearing it feels intuitive and natural. Then, once you’ve got the hang of it, reserve it for your heavier working sets of squats, deadlifts, overhead presses, and barbell rows. Some people wear them when benching, too, and that’s fine—you can wear a weight belt whenever you like.

Lifting belts make most people 5–15% stronger on the lifts where torso rigidity is a limiting factor, such as the squat, deadlift, overhead press, and barbell row. That extra strength allows us to use heavier weights, get more reps per set, or train with higher training volumes, and thus allows us to stimulate more muscle growth.

There are also some possible downsides to lifting belts, mostly stemming from the increased intraabdominal pressure that we get when doing the Valsalva manoeuvre. This extra pressure might be bad for people with varicose veins, varicose veins, hernias, and hemorrhoids, although expert opinion varies and the research is limited.

There’s nothing wrong with never getting a lifting belt. There won’t ever come a point where we simply must get a lifting belt in order to continue lifting safely or getting stronger.

Shane Duquette is the co-founder and creative lead of Outlift, and is the creator of Bony to Beastly and Bony to Bombshell, where he has eight years of experience helping nearly 10,000 naturally skinny people bulk up. He has a degree in Design Theory (BDes) from York University and Sheridan College, and lives in Toronto (Canada) and Cancun (Mexico).