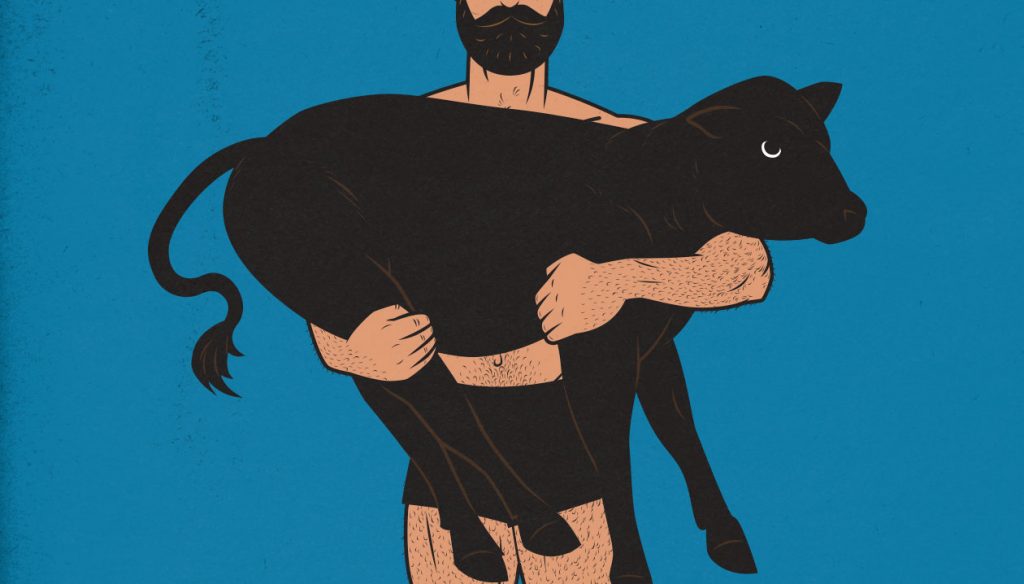 Most people play to their strengths. If you’re thin and fit, you focus on cardio. If you’re squat and strong, you gravitate towards strength sports. That’s good if you want to excel at a sport, but what if you’re trying to improve your versatility, general health, and appearance?

That requires turning your weaknesses into strengths. And when it comes to naturally skinny guys, weakness is our weakness. No matter how far you run—and ectomorphs can run quite far—you won’t be able to outrun skinniness.

There’s only one way to defeat skinniness: outlift it.

This is our first post, so let us introduce ourselves. I’m Shane, the creative half of Outlift. I’m a science communicator with a degree in design and visual communication.

Marco is the strength coach. He’s got a degree in health sciences (BHSc) and he’s certified to teach lifting (PTS) and give diet recommendations (PN). He’s great at it, too. He’s coached college and professional athletes, and he even got hired to help our Canadian Olympic rugby team bulk up.

We’re the guys behind Bony to Beastly (bulking for men) and Bony to Bombshell (bulking for women). You can read more about our credentials on our About page, but long story short, we’re experts in helping naturally skinny people bulk up:

Before we started helping other skinny people, though, we had to figure out how to solve our own skinniness.

We both grew up skinny. And not skinny in the do you even lift way. We were skinny in the are you sick way. I was 6’2 and 120–130 pounds. Marco was 6’4 and the most he’d every weighed was 150 pounds. We knew it was a problem. And whenever we tried to forget about it, our doctors would remind us that we were clinically underweight.

Now, don’t get us wrong. We were happy. We’ve always been cheerful guys. But we knew that we were on a downhill trajectory. At twenty, our bodies were already beginning to fail us.

We tried to outrun our problems

We ran track, we played sports, we swam, we jogged, and we sprinted. Marco played rugby and football. I took up martial arts. Still, our postures crumbled, we developed chronic injuries, and we struggled with insomnia and never-ending fatigue.

We were in bad shape, but not the way that most people are. Our bodies were long, lean, light and built for travelling long distances. We were actually pretty fit. Our problem wasn’t general fitness, our problem was general weakness.

e were so underweight that our hormones weren’t even working properly. I couldn’t fall asleep, Marco couldn’t feel awake.

In fact, at 18, even though I was fit and lean, I was at high risk of having a heart attack. Heart disease runs in my family, and my lifestyle wasn’t helping, so my doctor referred me to a heart specialist.

I remember sitting in the waiting room surrounded by red-faced obese men in their 50s, all of them staring at me perplexed. Eventually, one of the guys tapped me on the shoulder and told me I was in the wrong waiting room. He explained that this was the waiting room for people with heart disease. He couldn’t believe that a lean young guy could have the same heart issues as an overweight old man.

When I got in to see the doctor, she warned me that if I didn’t get my act together, I’d be on statins within a couple years, and even that might not save me from having a heart attack like my (also skinny) father did.

At this point, Marco was running into his own problems. He was accumulating injury after injury from playing sports, and none of them were fully healing, making him feel like a crippled old man.

We also didn’t like how we looked. We both hated being skinny. We both wanted to be bigger and stronger.

We couldn’t outrun our problems, so we decided to outlift them instead

It felt wrong at first. Our gangly bodies didn’t seem designed for lifting weights. Our arms were too lanky to bench press with, our legs were too skinny to squat with, and our long spindly torsos twisted and curved as we reached down to deadlift.

But imagine how an obese person must feel as they put on their running shoes for the first time to go for a jog around the block, their weight crashing down into their joints, their hearts struggling to pump blood through their massive frames, and their stocky limbs carrying them only half as far with every stride.

Should they give up? Should they accept their fate as future heart-attack victims and go back to powerlifting? Hell no. They should find a way to work around their limitations. There are stair climbers, rowing machines, swimming pools, and bikes, all of which will help them lose weight and improve their general fitness without wearing their joints down into dust.

Being skinny can be rough. It’s rarer. Fewer people relate to us. There’s less research looking into weight gain. Most bulking information is just repurposed fat-person information that doesn’t work very well for our body type.

We’ll admit it. We made excuses. We used the g-word: genetics. But we knew that scapegoating our genetics was a loser’s strategy. It was just a way to justify ignoring our problem.

But if a wolf keeps coming onto your land and dragging off your lambs, there’s only so long you can ignore it before you lose everything. It’s scary to march into the woods, where we’re weak and the wolf is strong. But that’s still what we oughta do.

So we started lifting

At first we benched the bar. Our shoulder joints weren’t strong enough for us to bring the barbell all the way down, so we put wooden boards on our chests to shorten the range of the motion. Over time, we added weight to the barbell. One by one, we removed the wooden boards. Soon our shoulders felt strong and stable, and we were benching 225lbs down to our chests.

We saw the same improvements on our squats. We started off with the goblet squat. A simpler variation that makes it easier to sink into a good bottom position. It was easier on our lanky limbs. When that was easy, we switched to front squats. Then we started back-squatting. Soon, our hips were strong and we were back-squatting 315lbs.

Deadlifts went best of all. What first seemed like a disadvantage became a strength. Our long arms were amazing for reaching down to the bar. And we didn’t have a beer belly to prevent us from getting down close to the bar. Soon we were deadlifting 405lbs, and in the process we regained our posture.

We were holding several hundred pounds in our hands, that weight supported by every bone, muscle and tendon between our fingertips and the tips of our toes. Hundreds of bones, hundreds of tendons, hundreds of muscles. All of them strong enough to support not just our own bodies, but another three bodies on top of that.

Over the course of growing stronger, I gained 55 pounds at 11% body fat:

At my latest appointment with a heart specialist, the doctor had me go to three different private clinics to get my bloodwork tested, retested, and then retested again. After the third test, he told me that in his entire career, he’d never seen such tremendous improvements in blood markers through lifestyle changes. Instead of being put on a lifelong statin prescription, I was told to keep doing whatever you’re doing!

To be honest, I hadn’t even been trying to improve my health. I was sick of looking so skinny and weak. I’d just been trying to get bigger and stronger. I’d planned to focus on improving my health after accomplishing my bulking goals. Turns out they were one and the same.