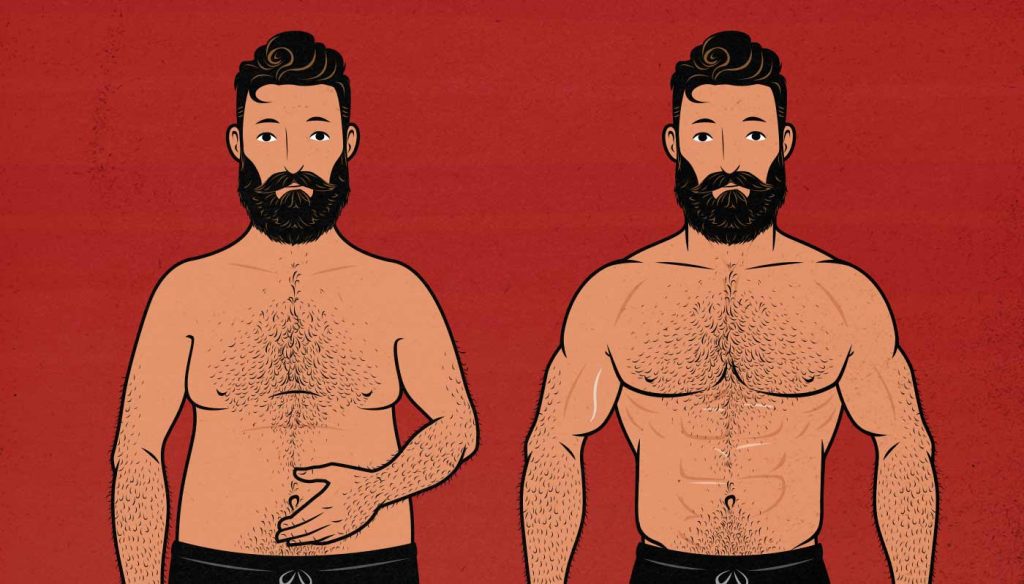 Most people are overweight, most people try to diet that extra fat away, and most people fail. But it’s not that we fail to lose fat. Most of us can grit our teeth, go on a diet, and lose some fat. Most popular diets, ranging from keto to veganism, really do succeed at helping people lose weight (study, study).

The problem is that our motivation ebbs and flows. When we’re riding a wave of determination, we succeed. But then when our well of willpower inevitably runs dry, we succumb to our appetites and undo all of our hard-fought progress.

When we finish a successful diet, we’re still the same people as we were before. The only difference is that because we’re leaner, we’re hungrier, and because we’re carrying around less bodyweight, we burn fewer calories as we go about our days. No wonder, then, that it’s almost impossible to keep ourselves from regaining all of the weight we lost—our cravings are worse than before and our metabolisms are lower.

Total bummer. If only there were another way…

If being lean were easy, everyone would be lean, we wouldn’t be in the midst of an obesity epidemic, and this article wouldn’t exist. Maintaining a lean physique will never be easy. Even so, there are a few things that make being lean easier:

I’ve already spoiled the suspense of the article with the title, so there’s no point beating around the bush: these are the benefits that you can get by lifting weights.

Someone who’s new to lifting weights will often be able to gain around 0.5 pounds of lean mass per week at first, and that number will gradually dwindle over time. Still, if we can gain 10–20 pounds of muscle in our first year of lifting, that would save us from an equal amount of fat gain.

Lifting weights burns calories as well, of course, and most people are able to burn a good 200–400 calories per workout, but our appetite tends to rise alongside those burned calories so that benefits often get cancelled out. Still, lifting weights does mean that you get to eat extra food.

Lifting weights isn’t famous because it burns a ton of calories, though. I mean, jogging around will burn far more calories than lifting weights. The point is, simply burning calories with our workouts isn’t the point. Better to invest in gaining muscle mass, which will burn calories all day long, while we’re asleep at night, and even when we’re plopped on the couch watching a movie with a bag of popcorn.

(For the sake of our general health, though, there’s certainly an added advantage to doing dedicated cardio.)

Having more muscle mass improves our nutrient partitioning. Being fat can blunt our insulin sensitivity, causing more of the calories we eat to be stored as fat, fewer to be stored as muscle. One of those instances where the poor get poorer and the rich get richer.

Fortunately, we can turn that problem into an advantage by lifting weights, and there are overlapping mechanisms that can help us do it:

What this means is that the more we lift weights and the more muscle we gain, then the more likely the calories we eat are to be stored as muscle instead of as fat. Over time, instead of getting fatter, we’ll gradually get leaner and stronger.

Eating more protein burns more calories. When we digest food, a certain amount of energy in the food is burned off as body heat. This phenomenon is called the Thermic Effect of Food (TEF). If you’ve ever eaten a big meal and then felt hot afterwards, that’s why.

Another benefit of building muscle is that it makes us heavier. As we lose fat, we get lighter, which means that everyday activities like walking start to burn fewer calories. It becomes hard to maintain our fat loss because our bodies are lighter, more efficient, and require less fuel. But we like fuel. We don’t want to be more efficient.

Building muscle offsets this downside. The price of being strong is that we need to eat more food to maintain our bigger muscles. And for many of us, that’s a price we’d be glad to pay.

Being heavier reduces our appetite. Our bodies don’t want to lose weight, and so there a bunch of built-in mechanisms to keep that from happening. Our bodies can sense when there’s less weight weighing down on our bones, and so as soon as we start getting lighter, our appetite hormones start pumping, and we find ourselves plagued by ravenous hunger and bizarre cravings.

When our willpower is high, we can resist those cravings. But our willpower can’t stay high forever, and so eventually we will succumb. And besides, even during the best of times, who wants to have their willpower constantly sapped by food cravings?

But if we can build muscle, we can stay heavy. Maybe not as heavy as we were before, but not light either. And if we factor in that a pound of muscle burns four more calories per day than a pound of fat, and that a small calorie surplus just means more muscle growth, then managing our appetite starts to become more realistic.

The crazy thing is, both of the guys in the illustration above might eat the same number of calories. They might even eat remarkably similar diets. The difference is that the guy on the right lifts weights, causing him to gain muscle instead of fat, raising his metabolism higher, and improving his insulin sensitivity.

If we add up all these factors, lifting weights could either help you lose an extra thirty pounds of fat per year or—just as important—stop you from regaining the fat that you’re losing.